Why is this filed under trip reports you ask? And better yet why is it on an outdoors website? Here's why. Shut up. When you have your own website you can stay loyal to your mission statement. Besides we don't even have a mission statement.

Big Red's Chicken and Waffles opened a little over a week ago and I just happen to have an affection for chicken and waffles. Probably from my trips to Roscoe's in LA.

The owner of Red's is from Huntsville but lived in Hotlanta for several years. Apparently chicken and waffles is quite popular in the ATL so Red decided to bring it back to his hometown.

Big Red's is located on North Parkway. Take the Max Luther Dr exit and it's right past KFC in the building vacated by Ole Hickory BBQ. I was able to drag my skeptical wife and two daughters there for lunch on my Friday off. To clarify, my wife was the skeptical one as my daughters aren't old enough to argue.

As you can see from their menu below they have much more than chicken and waffles. It's basically a greasy spoon during the week with daily specials and an assortment of sides. Order at the counter and your food is brought to your table.

Obviously you're going to want to get the chicken and waffles but, if you're like me you'll be perplexed that the menu states "Wings & Waffles". Hot wings and waffles does not sound appealing but not to worry they're your typical fried chicken wings. It took about 10 minutes to get our food and thankfully our 6-wk old held it together. It took an endless supply of animal crackers and Cheez-Its to keep our 18-mo old contained. Luckily our meals arrived just before she fully completed her transformation to rabid wildebeest and ran amok in the restaurant.

The batter used on the wings had great flavor and my only real complaint is the disappointing meat-to-bone ratio that haunts most chicken wings. The waffles were standard and my daughter and I made short work of them. My side item, fried corn, wasn't bad either. A mix between sweet corn and cream corn. Was that bacon slices in the corn? I think so. I hope so. 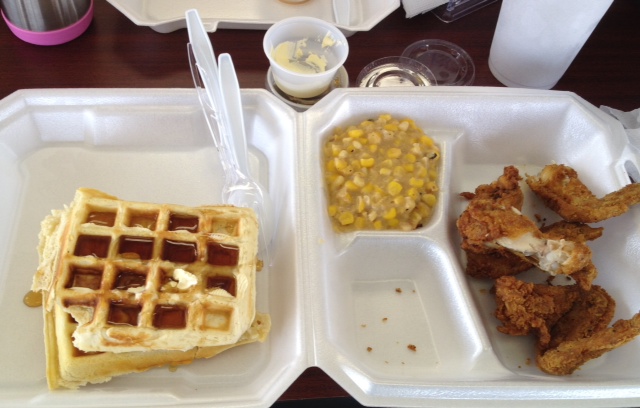 My wife had the catfish which she devoured. She wasn't a fan of the green beans having only one bite before abandoning them. But she wants to go back so what more can I ask?

So there you have it. My first restaurant review trip report and likely my last. Ooh, unless I do one on Limestone Bay Trading Co. in historic Mooresville. Mmmm, BBQ sandwich on cornbread buns. Actually that about sums up that restaurant. That and creamsicle cheesecake.

I also overheard Red say he was in discussion with WAAY 31 to do a cooking segment on their morning show. So if you're into that sort of thing watch out for it.